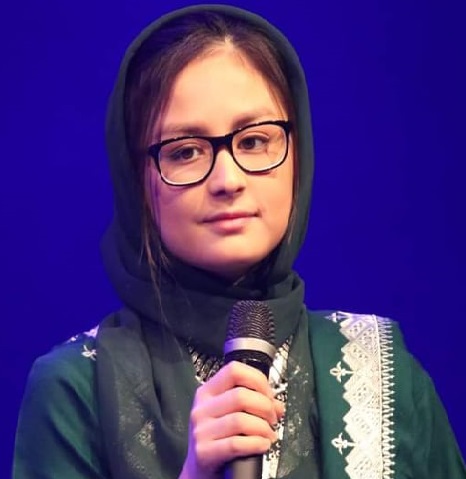 Shugufa Rafie studies law at the University of Vienna in Austria. She is chairwoman of Afghanischer Kulturverein in Österreich (AKÖ). She wants to raise awareness about the plight of the Hazara people.

Terrorist attacks, bomb explosions and rocket attacks are not on the agenda in Afghanistan. These are common incidents that take place there almost every day. Afghan security forces are now overwhelmed, and residents are living a life of terror. The world is just watching.

For more than 40 years, Afghanistan has been the home of an internal armed conflict between pro-government and anti-governmental forces as well as resistance factions. As a result of the constant clashes, murderous attacks and civilian casualties have been on the rise. Regions that until a few years ago were considered relatively safe are sometimes under the control of the radical Islamic Taliban or other armed terrorist organizations. Despite the current peace talks with the Taliban, violence in Afghanistan is escalating. In the last few months alone, countless people have died in universities, schools, and other places. Despite all this, Austria and Sweden deported Afghan asylum seeker to Kabul on December 15, 2020 and there more on the way.

Return Agreement Between Afghanistan and European Union
In 2016, a so-called “leadership” agreement [1, 2, 3, 4, 5] was adopted between the EU and Afghanistan, which obliges Afghanistan to take back Afghan nationals who have exhausted all legal avenues in the asylum process. In return, according to the media, Afghanistan receives 1.2 billion Euros. In addition, the EU program for the reintegration of refugees is committed to financing certain programs. These include, for example, the creation of new jobs and the training of returnees. The aim of this agreement was to prevent irregular immigration and to send Afghans back to their homeland as quickly and smoothly as possible without the prospect of asylum, without much concern that they would be sent back to a battered, unsafe country. This agreement is, therefore, morally irresponsible and inhumane, as is the statement by the former German Minister of the Interior, Thomas de Maiziére, who said: “Our concern at the moment in Europe is the large number of refugees from Afghanistan. We want the signal to get through in Afghanistan. Stay there! We will lead you back from Europe directly to Afghanistan! The fact that Afghans represent the second largest group of refugees is not acceptable. German soldiers and police officers are helping to make Afghanistan safe. Many, many sums of development aid have flowed into Afghanistan, so one can expect the Afghans to stay in their country.” Although Afghanistan has been named as one of the most dangerous and insecure countries in the world for the second year in a row, statements such as those made by the former federal interior minister are increasingly being heard.

The Dangers in Afghanistan
The risks posed to the returnees can be inferred from general dangers as well as from the daily headlines in the media, and it is precisely these analyses that show that those affected are exposed to many dangers. Nevertheless, it is not possible to document the personal experiences of returnees, as they are not publicly known on the one hand and cannot be queried for reasons of data protection law on the other. However, it is clear the danger that Afghans are exposed to. In the last few months alone, we have been inundated with several more traumatizing headlines. For example, on May 12, 2020, a maternity hospital in western Kabul (Dasht-e-Barchi) was attacked by terrorists. According to eyewitnesses, the terrorists fired indiscriminately at patients, doctors, nurses, and visitors who were in the maternity ward. Grenades were also thrown in all parts of the hospital, killing and injuring dozens of people, including women, children, and newborn babies.

On October 24, 2020, more than 20 schoolchildren died as a result of a suicide attack in the Afghan capital Kabul. The assailant, who was trying to gain access to an educational center, Kawsar-e-Danish in the western district of Dasht-e-Barchi, blew himself up when he was recognized by security forces. This is not the first time that an educational institution has been attacked. In 2018 also, many young people were killed as a result of a terrorist attack. Unfortunately, these attacks are not taken seriously in Afghanistan. In recent months, attacks have increased on hospitals, schools, universities and markets. In particular, the Hazara ethnic group, which are predominantly located in Dasht-e-Barchi, are affected.

The population of Afghanistan consists of several different ethnic groups: Hazaras, Pashtuns, Tajiks, and Uzbeks are the largest ones. The Hazaras are an ethnic group that have been discriminated against for more than a century and deliberately targeted for killings, marginalization, and deprivation. Long before the tyrannical rule of the Taliban, Hazaras were marginalized and dispersed by Pashtuns. For instance, at the end of the 19th century, 62% of Hazaras were massacred under the leadership of Abdul Rahman Khan. Even today, the Hazaras suffer more and more in their daily lives under various forms of discrimination, be it religious, social, or gender, which always exclude them from other fellow human beings in schools, universities, and in working life. According to recent reports, there are increasing cases of intimidation, harassment and killings by the Taliban and other terrorist organizations such as ISIS.

In Afghanistan there is thus an unpredictable and tragic conflict across the country, which is responsible for the deaths of tens of thousands of civilians. As a result, no part of the country can be labelled as safe. The European Union and its member states deliberately ignore these dangers in order to be able to achieve a high number of returns. Despite increasing dangers in the country, the number of repatriations is increasing. In order to carry out these deportations, they have declared Afghanistan or some parts of it, such as the capital Kabul, which is currently known as the most dangerous region, as “safe”. Nevertheless, more and more Afghan refugees are being sent from Europe to Afghanistan. The European Union and the member states not only ignore this, but also support it, as the tear gas campaign in Greece in 2020 clearly shows. After Turkey allowed thousands of refugees to travel on unhindered, the Greek police not only fired at thousands of refugees, but also initiated collective deportations to Turkey. This act violates European asylum and refugee policy, because according to this, the reception of refugees and asylum seekers is not only a moral obligation, but also a human rights issue that is laid down in international and European conventions.

Given the precarious situation in Afghanistan, we demand the immediate suspension of all deportations to Afghanistan and a fair negotiation taking into account the current situation there.